“The Kid” by Sapphire 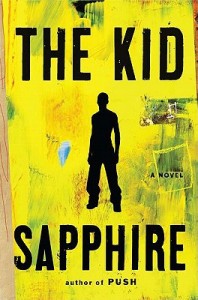 Sapphire’s second work of fiction, The Kid, begins with the funeral of the protagonist of her first novel, Push (my review here). Precious’s son, Abdul, is nine years old, and in the wake of his mother’s death he faces a terrifying world completely alone.

Throughout the book, he is shuttled from one place to another: foster care; a school for orphaned boys; his great-grandmother’s ancient Harlem apartment; his middle-aged sugar-daddy’s upscale place; a downtown artist’s loft; and finally a mental hospital.

Abdul resolves to do whatever it takes to reach his dream of being a successful dancer, but the path to success is not easy. And just when it seems like he has made it, the side of him that he has kept hidden for too long takes over.

The Kid explores the line between victims and perpetrators and the sometimes self-perpetuating violence of rape. Patterns of sexuality as violence control Abdul’s life; he suffers abuse at the hands of his caregivers, and he begins inflicting abuse on other children.

It is impossible to separate his revenge fantasies from his actual life, and he insists that he only does bad things in his “dreams”; he can’t understand why he would be punished for that. Abdul blends reality and fantasy in a way that reminds me of Black Swan; in fact, he even references “Swan Lake” to describe himself at one point.

Identity is a central, if subtle, theme. While his mother, Precious, never let anyone call her by any other name, Abdul changes names like others change clothes. And just as Precious’s identity stood firm despite what others did to her, Abdul’s identity morphs with every name change.

When he is J.J., he is both a victim and a perpetrator of sexual violence. When he is Arthur or Martin, he uses sex for commercial gain. When he is Crazy Horse, he is a vengeful wild man. Abdul is so jealous of the life he could have had, he does not understand that he is choosing to become someone else–to lose himself–every time he gives up his name.

Furthermore, his sexual identity is tangled up in sexual violence. He despises homosexuality but he embraces it at the same time; the only way he knows how to survive is to offer himself to others, usually men.

He is never able to overcome the divide in his mind that threatens to overwhelm him, because he doesn’t really know who he is. His only goal in life is to find acclaim as a dancer–to be a “beautiful black boy” that everyone loves–but he sacrifices too much of himself to get there.

What impressed me more than Precious’s sense of self was her optimism; no matter what life threw at her, she kept going and reaching for a better life.

Abdul, on the other hand, rails against the injustices of his life. He believes that he would have been different–better–if his mother had lived, if he’d known his father, if he’d had more money like other kids, if, if, if.

He yearns for a “normal life,” and he questions why he “can’t just get a full deck like everybody else.” However, he never stops to think about the changes he has the power to make in order to better his life. Because he never accepts who he really is, he is never able to escape his enduring pain.

His dissociative behavior and strange internal dialogue are strong indicators of a schizophrenic antisocial personality disorder. A protagonist like that is hard to like. (Unless you’re Chuck Palahniuk.) As the book goes on, it becomes harder and harder to want to hear more about him; Abdul is increasingly and unrepentantly violent as his “dream” world and his real world begin to collide.

I only kept reading because of my obsessive desire to finish a book once I’ve started it. I needed to know what would happen to Abdul. But the ending was far from satisfactory; I really have no idea what happened to him or even who he really is, where his twisted “dreams” end and his life begins. And that’s probably the point–he doesn’t know either–but The Kid pushes this trope a little too far.

Sapphire seems to glory in the casual violence, the disappearing boundaries between pain and pleasure and between sanity and madness. And I get that–I like dark and gritty and uncertain. But she seems more intent on shocking readers with intensely graphic scenes than on inspiring any real emotion.

DeNeen Brown, in a review for The Washington Post, commented that “a sensitive reader may want to put the book down and turn away.” I do not consider myself a sensitive reader, but this book horrified and sickened me; I struggled to finish it, and I felt no closer to understanding Abdul after I’d turned the last page.

And to top it all off, you never find out what happened to Little Mongo, his older sister!

Interested? Read it for yourself! Buy The Kid from an independent bookstore or Amazon (Kindle edition).

Or check out what other reviewers on the tour have been saying:

Tagged as: Abdul, bad plot, child abuse, confusing ending, fiction, Harlem, Precious, Precious Jones, Push, Sapphire, sexual abuse, The Kid, TLC Book Tours, what does the ending of The Kid mean?, What happened at the end of The Kid by Sapphire?, What happens to Abdul?