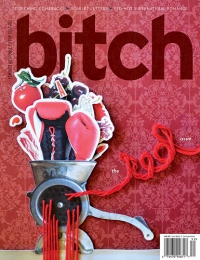 Called the “feminist response to pop culture,” Bitch magazine is an excellent resource for progressive women and men, whether you identify with the “feminist” moniker or not. (But it helps if you do.) I began reading issue #52, the red issue.

From a design perspective, the creative and modern layout and adherence each issue’s theme are home runs. But the true triumph is the prose: it is smart without being esoteric, edgy without being offensive, mischievous without being crude.

I was first impressed by an examination of the sterile sexual phrase “get it in” on MTV’s Jersey Shore. At one point, Christine Seifert writes, “‘Getting it in’ is hardly different than finding yourself at an exclusive club, at which you can check in on Facebook using your iPhone.” This is feminism? I wondered. I just think this is smart and interesting analysis!

I then moved on to a piece by Avital Norman Nathan about gender stereotype-eschewing “princess boys.” I was surprised to learn that until the early twentieth century, the color pink was associated with men because it was seen as a diminutive of masculine reds. It was only when the mass production of clothing and toys caught on that the division in colors occurred. Manufacturers discovered that “the more you individualize items based on gender, the more products parents will feel compelled to buy.” So these boys are also bucking the consumer mentality that dominates our culture? Way to go, guys!

But by far, the best part of this edition of Bitch were the two big pieces on literature: “Uneasy A” by Erin Gilbert and “Sealing the Deal” by Jessica Jernigan. Both of these essays were fun, informative pieces that explored different feminist themes in literature. Gilbert looked at adultery and anger among women in books, while Jernigan introduced a fresh perspective on the wet and wild world of selkie romance novels. Even if I weren’t an enormous book nerd, I think I would have enjoyed their cutting analyses and relevant discussions of important topics through the lens of literature.

The only part of the magazine that I didn’t like was the positive review of Sapphire’s The Kid. I think I can say without qualification that I hated that book. But hey, you can’t win ’em all. Aside from that minor bump in the road, Bitch magazine is a fantastic publication that I immediately subscribed to upon finishing this edition.

Subscribe for a Year | Buy an Issue | Read at the Library

Subscription Saturday is a way for me to keep track of the print and digital publications that I’ve been reading lately.