“What Language Is” by John McWhorter 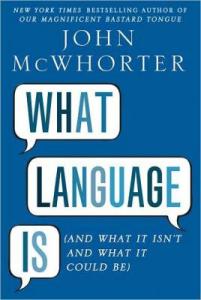 What it is: A passionate defense of language as a living thing.
What it’s not: A primer for “proper” grammar nuts.
Why you should read it: So we have something to talk about at my next cocktail party. (It doesn’t matter if I don’t know you; if you read this book, you’re automatically invited.)

In his newest book, John McWhorter seeks to address common misconceptions about what makes up a language and what doesn’t. Far from a known thing with a set of written rules, language is ever evolving, and its state of constant change is a sign of its health.

McWhorter argues in each respective chapter that language is “ingrown,” “dissheveled,” “intricate,” “oral,” and “mixed.” (McWhorter’s initialism for these traits is I.D.I.O.M. What a cunning linguist!)

McWhorter proposes that the closer-knit a community, the more “ingrown” a language. These languages are more complicated, but far from making them strange it demonstrates their very normalcy. Only a few freakish languages like English and French have become streamlined and easier to learn:

These are “man-made” in the sense of being an outgrowth of transportation and military technology. The subjugation of massive populations, the ruling of them from afar, and the transportation of them across vast distances into central locations, where people speaking different languages had to learn a new one quickly, was unknown for most of Homo sapiens‘ history. Only when this sort of thing became possible was there any reason for a language to undergo the peculiar circumstance of being learned as much by adults as by children.

As adults learned the languages of major empires, they simplified complicated concepts and made the languages more user-friendly.

In fact, the only constant in language is this propensity for change; the instant one begins applying out-of-date (or artificial) constructs to it, it begins dying. McWhorter has little patience for grammar sticklers:

That Shakespeare spoke a different English from Chaucer is considered luscious. That people fifty years from now might speak slightly differently from us is considered a herald to the demise of civilization as we know it.

McWhorter’s account is descriptive, rather than prescriptive; in other words, he attempts to describe what language is without instructing the reader on how it should be. This crucial difference is what separates a book on language from a book like, say, Eats, Shoots & Leaves (the title of which, I am compelled to point out, is the result of a typo, not a grammatical error).

McWhorter also seeks to distinguish between language and orthography. There is a difference, he contends, between the words published to a page and the words that tumble from any speaker’s mouth. As he states simply, “You do not speak in letters. You speak in sounds.” He continues,

As literates, we inhale a sense that The Language is on the page, unchanging, while what goes on in the mouth, unscribed and changing from decade to decade, is a variation on the written–and, in its impermanence and fluidity, inferior.

On the contrary, McWhorter is quick to point out, language consists of the ever-changing–and constantly growing–ways in which every person, literate or not, communicates throughout the world.

Grammar is not a universal system that bears resemblance to a few popular tongues, McWhorter explains, but “the kind of thing speakers of a language do subconsciously without being able to explain it–systematic rule-bound practices of the kind that foreigners strain to learn.”

He tackles every aspect of the nature of language, discussing morphology and historical linguistics simultaneously with ease. But you would never know that these are the academic names for what he is talking about; his easy, conversational tone translates jargon effortlessly. His unique blend of humor and erudition is refreshing, and this is the first book about linguistics that I feel comfortable recommending to the general population.

I loved this book; though its necessarily academic nature was occasionally dry, it’s the best book I’ve ever read about language, and it reminded me why I began studying linguistics in the first place–because the way people communicate with one another is an endless and fascinating and important. I can’t wait to read Our Magnificent Bastard Tongue, McWhorter’s last book, which has been (shamefully) gathering dust on my shelves!

And yes, he does talk about how many words the Eskimo have for snow. But, thankfully, only briefly.

Don’t just take my word for it! Buy What Language Is for yourself from an independent bookstore. Each sale from this link helps support Melody & Words.