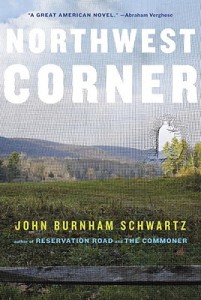 I’m giving this book away to one lucky reader in the United States or Canada! Just leave a comment below and you’ll be entered to win. I will be choosing a winner at midnight on August 15.

Short and sweet: Northwest Corner picks up twelve years after Reservation Road ended.
Theme song: “How to Save a Life” by the Fray (See “random pop culture references” below.)
Recommended for: Baseball fans who appreciate the lasting effects of latent violence.

Dwight Arno served his time in prison for not reporting his fatal accident with Josh Learner, and he is now living quietly in California. But in waiting to turn himself in, did he miss his shot at redemption? Will the mistakes he’s made continue to haunt him?

His son, Sam, is a senior at UConn and a rising baseball star. But when he fails in the most important game of his life, the violence rippling within him pours out—with potentially life-altering results.

Dwight’s ex-wife, Ruth, left her simpering second husband when she learned that she had breast cancer. She’s learning to live by herself with the knowledge of her own mortality, but she can’t stop thinking about the way her family was and the way they could have been, “hoarding the past not because it’s better but because it’s the only thing she seems to own.”

And Emma Learner has learned to keep her head up high—even after her father withdrew into his academic endeavors and her mother drastically refashioned a new life for herself. Can Emma and her mother salvage their rusty relationship so easily?

Even after the two families have spent so many years recovering from Josh’s death, their lives are still inextricably linked, and they find it difficult to move past the tragedy that binds them.

They are all learning how to let go of the past and in so doing move on and grow, but their growth is long in coming; much of the book serves to show how mired in bitterness and nostalgia they are. Theirs is a long and halting journey, filled with false starts and setbacks.

Dwight is the only character who also had a POV in the previous book, while Sam, Emma, Ruth, and Penny—a woman with whom Dwight has a blossoming relationship—are new point-of-view characters. Dwight, the only character whose POV is told in first-person, is clearly the main character of Northwest Corner. Grace has been relegated to the periphery, and Ethan, one of the two first-person narrators in the first book, has faded quickly out of the story.

Which brings me to my next point. Though, by the end of Northwest Corner, all of the main characters seem on the right track to healing and forgiveness, Ethan is nowhere to be found. His raw pain and grief-stricken anger were among the driving forces in Reservation Road, but he is only mentioned piteously in passing by Emma as she reflects on how deeply her family has been torn apart. I would have liked to see more from him.

Furthermore, in trying to age the characters more than a decade, Schwartz goes a little too far. He makes them too nostalgic, too antique. If one ignores the seemingly random pop culture references he inserts into the narratives of Sam and Emma, one might forget that they are supposed to be in their twenties, not of an age with the other narrators.

It’s possible to read this book without reading the prequel, but you might be left wondering why an accident one night had the power to ruin the lives of seven individuals, lives that seem to have only worsened in the intervening time between books.

Dwight killed Josh Learner, and he didn’t stop or turn himself in immediately. That sucks. But the accident was just that—unintentional and unavoidable. Dwight served his time, and many years have passed. Was the tragedy that bound these two families together so momentous that, twelve years later, they are still unable to move on?

Perhaps it was. The death of a child is not something you can get over so easily, or at all. Even so, the story seemed a little too dramatic. The idea of exploring the lasting effects of an accident on the lives of two families that were previously only tangentially linked is a good one–it’s what made Reservation Road so poignant–but Northwest Corner pushes that conceit to a breaking point.

Reservation Road was so grounded in geography—a passion of mine—that I was excited to see how Schwartz continued this theme, especially given the location-based name of the book. I was surprised to find half of the story takes place in California, far from the book’s eponymous locale. But the concepts of home, identity, and belonging bind the characters, if not to a place then to a feeling. As Dwight observes: “The place called home is the one place you can drive into at night after a lifetime away, with no light to see by, and still know exactly where you are.”

The prose is deep without avoiding weightiness; the telling sometimes gets in the way of the story. But it is an interesting story of redemption and forgiveness.

Once we were happy, we had no memories.

-Louise Glűck, “Song of the River,” in The Triumph of Achilles

But don’t just take my word for it. Check out what other reviewers on the tour have been saying:

Or, of course, leave a comment below to win the book and find out for yourself!