“We” by Michael Landweber 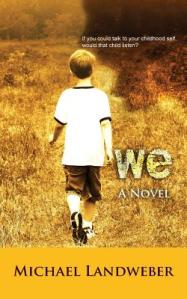 Ben was 42 when he reached to scrub an old stain from the ceiling of his apartment and lost his balance. When he opened his eyes, he was 7 again. He had traveled back in time to the days before his sister’s rape tore their family apart.

As Ben relives those days through his 7-year-old self, Binky, he struggles to warn his family of the impending tragedy written in their future. But you can’t change the past—can you?

I really enjoyed the experimental form of this novel. Ben coexists with his younger self, who is in subject to strong currents of emotion—love, terror, anxiety—that as an adult he no longer feels so strongly. The best part of the novel–really, a novella–was his keen sense of the loss of his entire family, not just Sara. His father’s indifference, his mother’s abandonment, his brother’s distance.

In addition to the waves of feeling that regularly buffet his seven-year-old self, Ben can’t escape the ways the tragedy affected his own attempts, or lack thereof, at a family. “I was terrified of repeating my father’s mistakes, of showing a child his indifference,” he reflects while thinking of his partner’s insistence on adoption. “I wanted him to feel the absence of my mother the way I felt it.”

The ending was somewhat disappointing; it took the story from a realistic psychological or even medical story to a story about time travel. In my opinion, it misses the opportunity to reflect on how the past cannot be changed—only the future.

The story, however, was well-written. Anyone who has ever experienced or imagined a family tragedy (so, basically, everyone) can appreciate the wrenching apart that older Ben anticipates as he tries to change the events of that night. I was struck by parallels with my own family; this passage in particular resonated with me:

No one knew if Sara was tired or hungry or alone or alive. Her absence was deeply felt, there being a full, untouched place-setting laid out before her chair. I had listened to my mother make all the obligatory pre-dinner phone calls to Sara’s friends, or at least the friends she used to have in the long-ago time when she last confided in my parents. With each call, each act of contrition, my mother wilted. I sensed that this was a common ritual—the search for Sara. There was not much effort invested in it, no real hope for success.

In all, I enjoyed the book, but the ending clouded the rest of the story for me. But I’m looking forward to the next book by Landweber, a local author.

Don’t just take my word for it! Check out what other people on the tour have to say:

Or buy We from an independent bookstore or Amazon (a Kindle version is also available). Each sale from these links helps support Melody & Words.