“The Train of Small Mercies” by David Rowell 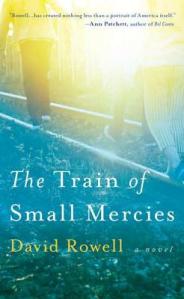 The Train of Small Mercies follows one day in the lives of six people who encounter the funeral train of Robert F. Kennedy as it travels from New York to Washington, D.C.

New York: The first day of work is always a memorable experience, but for Lionel Chase, who arrives at his new job as a porter to find that he will be working on the funeral train, this day will really stand out.

New Jersey: Michael Colvert, a sixth-grader whose parents are going through a messy divorce, tries in vain to distract his friends from his troubled home life.

Pennsylvania: Dolores King only desires to escape her controlling husband for a few hours so that she can grieve for the slain senator, but her lies become ever more complex—and dangerous.

Delaware: Edwin Rupp just wants to have a pool party! But his guests are really pulling down the mood.

Maryland: Jamie West, a young veteran, waits to be interviewed by a former classmate about the injuries he sustained in Vietnam.

Washington, D.C.: Maeve McDerdon just arrived in DC to interview as a nanny with the Kennedy family. Now what will she do with her future?

With so many characters, you run the risk of confusing the reader about who is who and where they are at any given point in the narrative. But each character in this book is distinct, with a markedly different backstories from each other and wildly different motivations. I had no trouble at all keeping them apart; the geographic tags helped a lot.

I’m a sucker for place-as-character, and I thought the geography shone in the book as much as the characters did. (I was especially happy to see one of the stories set in Delaware, my home state—a rarity.)

This isn’t just a story about the characters’ reactions to a tragedy that rocked the nation; it’s a peek into the ways Americans go about their lives, the tiny deceptions and bigger secrets, the compromises and dreams. He doesn’t tie his characters up with a bow and deliver them neatly. Rather, the narrative is a slow unraveling, digging into who they are. The next big revelation, the thing that really explains who they are and what they do, remains right below the surface.

Rowell’s subtle, clear prose is like a just-washed window: it’s there to see through, not to examine for its own sake. Take this passage, for example:

Their marriage had been marked by long stretches of silence in between too many cruel arguments, and in a relatively brief spate of years they arrived at a general state of shock that they could have ever loved each other at all.

This single sentence does so much work. It shows how the marriage crumbled, and why, and how long it took, all in one beautifully constructed sentence.

I’m sure there are many other passages that employ a similar beauty and economy of words. This was the only quote I bookmarked, though, because I was completely pulled into the story. For me, it was one of those books that made me forget I was reading, where the act of turning pages becomes a form of breathing. By the time I was done, I couldn’t put to one passage or character or location that made the book such a pleasure to read. It all worked together like an orchestra.

The Train of Small Mercies could, perhaps, be called a novel in stories. None of the characters’ lives intersect; the strands weave together, almost like short stories that stop and then pick up. But their stories—the different ways people react to the death of RFK, the way it affects or doesn’t affect their daily life—combine and accumulate into a moving novel.

In case you couldn’t tell, I enjoyed this book!

* I know the author in a professional context, but that did not influence my review of this book. In fact, I only bought it after Carrie gave it 4.5 stars!

Don’t just take my word for it! Buy The Train of Small Mercies from an independent bookstore or Amazon (Kindle version is available). Each sale from these links helps support Melody & Words.