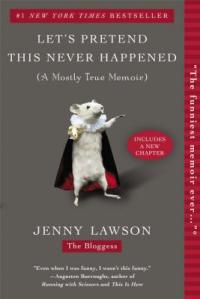 Jenny Lawson, better known as The Bloggess, is kind of a big deal. She has more than 342,000 Twitter followers–including Neil Gaiman–and a popular blog supported by ad revenue; maintaining her site and Twitter feed is a full-time job. After becoming an online superstar, she published Let’s Pretend This Never Happened: A Mostly True Memoir.

That’s why I was surprised by her appearance at Book Expo America (BEA) last year. Not only did she look very different from the picture she uses online, but she was kind of a wreck–hands shaking, clearly nervous, on the point of puking. I kind of expected a bigshot to get up there and tell one joke after another. Instead, she talked about how heavily medicated she had to be in order to speak in public. She talked about how mental illness is stigmatized, and how she has the urge to self-harm, and how sometimes she is too depressed to get out of bed.

She was absolutely, heartbreakingly honest. I was moved to the point of tears, and immediately read her book on the bus ride home.

The point of the book, she writes in a brief note at the beginning, is to trace how the unusual and bizarre events of life make you into the person you are.

From artificially inseminating a cow by hand (or, rather, arm)…
to dropping acid and talking on the phone to a Thundercat…
to accidentally ordering taxidermied animals online….

Lawson has no shortage of bizarre stories. Her book is howl-with-laughter funny (warning: people on the bus will shoot you strange looks, but the upside is, no one will want to sit next to you!)

The book is chronological, going through childhood up until now. She focuses on the funny scenes, only giving enough background to grant context. The scenes from her childhood are funny, but I thought she really got rolling as an adult—when she met and married her husband, Victor, and especially her struggles to conceive and then give birth to her daughter, Hailey. The book could have been about only that. Perhaps my favorite part is when she tries to convince her obstetrician to create a lightning-shaped scar (a la Harry Potter) with the episiotomy. (Sadly, she does not prevail.)

Some of the best parts are when she talks about her mental health issues: anorexia, depression, the urge to self-harm. She is painfully honest but also painfully funny. I dog-eared far too many passages to share here.

As a writer, I was interested in her creative process and the road to publishing a book. At BEA, she addressed the question of turning a blog into a book. She said that, actually, she wrote a book about her family to show her daughter, but it ended up being too personal to publish. So she stashed it and starting blogging, which is where she found her niche and developed her voice. Then this book came about, so she said it was more like a book-to-blog-to-book.

My one criticism has to do with structure. Memoir is different from autobiography in its focus on a certain event or idea. This book doesn’t really have that focus. It seems like she selected scenes just because they were funny–not because they built to some larger narrative. I wonder if this is because of her history as a blogger; sometimes, it’s almost like a collection of printed blog posts–although these chapters are much, much longer than a post. I also thought that the slapstick humor that often works well on a blog gets a little old in a book.

That being said, I really enjoyed Let’s Pretend. Jenny Lawson is uproariously funny while still handling some very difficult topics with grace and honesty. Read it if you like funny, sometimes crude, and always awkward family stories.

Don’t just take my word for it! Buy Let’s Pretend This Never Happened from an independent bookstore or Amazon (Kindle version is available).