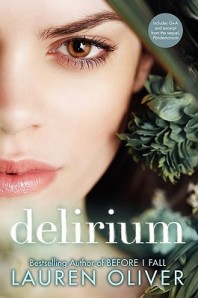 “It has been sixty-four years since the president and the Consortium identified love as a disease, and forty-three since the scientist perfected a cure.” So begins Lauren Oliver’s electrifying book, Delirium, the first in a trilogy of the same name.

In seventeen-year-old Lena Holoway’s world, nothing is more dangerous that amor deliria nervosa—love.

All citizens are required to undergo a procedure, much like a lobotomy, when they reach the age of eighteen in order to be “cured” of deliria. Lena, whose eighteenth birthday is a few short months away, couldn’t be more excited. Her whole life has been shadowed by the dark cloud of her mother’s unacceptable behavior and the heartbreaking suicide that has left Lena in the care of her impassive aunt and uncle. But once she is cured, Lena will finally be like everyone else:

I comfort myself by thinking that in less than two months this will seem like nothing to me. All of it will fall away and I’ll rise up new and free, like a bird winging up into the air. That’s what Hana doesn’t understand, has never understood. For some of us, it’s about more than the deliria. Some of us, the lucky ones, will get the chance to be reborn: newer, fresher, better. Healed and whole and perfect again, like a misshapen slab of iron that comes out of the fire glowing, glittering, razor sharp. That is all I want—all I have ever wanted. That is the promise of the cure.

That’s why it is so important that Lena do well on her tests. The thorough examination will determine the rest of her life: the man she’ll marry, the college she’ll attend, the profession to which she’ll devote her life.

But on the day of Lena’s test, something strange happens—something that will alter the course of her life. She meets Alex.

Alex isn’t like anyone else she has ever met, and Lena finds herself drawn to his sense of humor and the feeling of freedom he exudes. At a forbidden party, Lena discovers the beauty of illegal music, and that is when she begins to fall in love:

This music ebbs and flows, irregular, sad. It reminds me, weirdly, of watching the ocean during a bad storm, the lashing, crashing waves and the spray of sea foam against the docks; the way it takes your breath away, the power and the hugeness of it.

Lena begins to realize that there is a whole world outside of laws, of patrols, of the electrified fence of Portland, Oregon. An impossible world: one without fear of love.

And Lena can’t help but wonder: Is the cure meant to protect her—or to control her?

Delirium is one of the best books I have read in a long time. There’s no way I can possibly do this book justice in my review, but I will try, because I can’t recommend it highly enough.

There is so much to enjoy in this book. It’s a dystopian Young Adult romance, which will throw off many readers who don’t usually follow one or more of those genres, but somehow this book transcends those genres and succeeds in telling a fascinating story very well. Beyond the forbidden romance between Lena and Alex and the intriguing rules of their dystopic society, there is a coming-of-age story as Lena and her longtime best friend, Hana, begin growing up and growing apart. After high school graduation, Lena knows that things won’t ever be the same between her and Hana, and with their other friends:

Who hasn’t stood on the stage to accept a diploma and thought something similar?

But perhaps the best part of the book is the thrilling suspense of Lena’s journey to learn the truth about those who rule her world—and what really happened to her mother.

I’m usually pretty good at anticipating twists and turns, but I felt utterly in sync with Lena as she made discovery after wrenching discovery. I was swept in to the book—the kind of involvement that makes you miss your metro stop, that makes you keep reading as you walk to work, that makes you recommend it to all your friends before you’re even done reading and then makes you call them up, breathless, to compare notes once you’ve both finished.

Lauren Oliver is, unexpectedly, a masterful world-builder. I really enjoyed Before I Fall (my review here), but Oliver has truly honed her craft in this, her second book. It’s not just the story that sucked me in; it was also Oliver’s writing, as when she describes Lena’s mixed emotions toward the words that have defined her:

Sympathizer. It’s only slightly better than the other word that followed me for years after my mom’s death, a snakelike hiss, undulating, leaving its trail of poison: Suicide. A sideways word, a word that people whisper and mutter and cough; a word that must be squeezed out behind cupped palms or murmured behind closed doors. It was only in my dreams that I heard the word shouted, screamed. 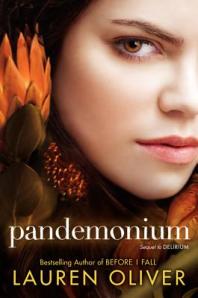 As my fellow book blogger Jessica Lawlor commented, “DELIRIUM is every positive book review cliche that I can think of: powerful, heartbreaking, moving, shocking, gripping, fascinating, a real page turner. . . . This book is a must-read. In my opinion, it’s a must own.”

I couldn’t agree more! And I can’t wait for the final two installments of the trilogy. I’ve already pre-ordered Pandemonium, which is set for release in March 2012. You should too!

I know that life isn’t life if you just float through it. I know that the whole point—the only point—is to find the things that matter, and hold on to them, and fight for them, and refuse to let them go.

Don’t just take my word for it! Buy Delirium for yourself from an independent bookstore. Each sale from this link helps support Melody & Words.