“The Printmaker’s Daughter” by Katherine Govier 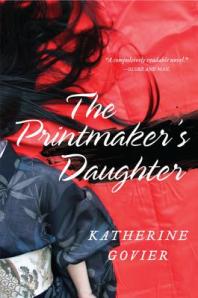 Oei is a painter in her father’s studio, his oldest and most faithful disciple. Her father, Hokusai, is a famed artist throughout Edo, and his influence is reaching other parts of Japan as well. Despite the shogun’s censorship of art and free speech, Hokusai’s work only grows in popularity, and he even sells his art to the Dutch traders who are allowed limited engagement with Japan.

From the day she was born, her mother—Hokusai’s second wife—gave Oei up to her father, and the two became a pair. As Oei grows older, she becomes more and more like her father, and as the old man’s fame increases, he depends upon her steady hand and eye for vibrant color—though he rarely acknowledges their symbiotic relationship. The charismatic Hokusai claims Oei’s talent as his own even as it begins to take on its own life and outshine the old man’s famous style, and Oei submits to him out of duty.

Hokusai is eccentric, to say the least:

Myoken [the north star] was his master. His master said he need not eat when others ate. He need not sleep when they slept. He need not paint what other people wanted. He must paint what he was driven to paint. He must not perform the act of creation strictly for money, or for our convenience. He must dance to the master’s tune.

After his second wife dies and he is gripped by palsy, Hokusai depends upon Oei to support him. “Suddenly he was all I had, and I was all he had,” she says. Her support of him is physical, emotional, and artistic, and it leaves Oei no time to branch out on her own. Such independence would be a betrayal. Hokusai’s life improbably stretches twice the length of the average Japanese man of his times, but after the old man’s eventual death, Oei is offered a chance to claim her many works under Hokusai’s name. Will she leap at the chance for greatness, or will she continue on as a ghost brush?

One of the most interesting aspects of the book is the unstoppable influx of foreigners into a closed Japan. As Oei ages and becomes more and more independent, the world seems to be opening up to her. “My old life and its people were becoming relics,” she comments. “A new world was advancing on us.”

The author explains in the afterword that she first became interested on Oei—“the ghost brush”—after seeing an exhibition of Hokusai’s many works in D.C.’s Freer Gallery of Art. Comparing his works side by side, it becomes apparent, she writes, that the painter known as Hokusai could not have done this alone. Especially not the final painting, said to have been completed in his eighty-ninth year, with fine details and a total departure from the old man’s style.

She writes, “I knew then that no matter how difficult it would be for an amateur and a non-speaker of Japanese to crack this world, I would write the story.” Employing short, staccato sentences for much of the book, Govier explores what Oei’s life might have been like. Govier appears to have done her research into the fascinating theory that there were two artists painting under the seal and signature of Hokusai.

But a theory a story does not make. I need conflict, I need shape, I need to feel that this is story and it is going somewhere. Instead, we see a woman’s life stretch and meander over six decades as she grapples with her and her father’s identities as artists. That’s a cool idea, but where is the rising action, the climax? I feel like a high-school literature teacher asking that, but the fact is that this book has little narrative shape. Without a sharp direction toward climax, there is little conflict and tension in Oei’s story. Such rising action—the hurtling toward a crash—builds tension. It makes you want to read more—which would be helpful for this book, because it spans 500 pages.

Anything would have spiced up the narrative. Will Oei confront her father and either strike out on her own or learn to submit to him? Will the arrival of the foreigners in Japan’s ports set her free or hold her prisoner with their trade? Will her dalliances with married men come back to haunt her when she is old and lonely? Will she confess a long-nurtured love for Shino, a noble courtesan who inexplicably adores Hokusai? Any of these questions would have made the book more interesting, and though you may find them in the book if you look hard enough, the force of their clash is muted down to a whisper. (OK, maybe that last one is a bit of a stretch… but it certainly would have been an interesting development!)

Without conflict, without that certain sense of something about to happen, there can be no true tension. Any tension feels fabricated, false, unsupported. The only tension I could find was Oei’s struggle to find herself and to be true to that self. That’s a nice theme, but you can’t tell a story about themes.

The best part about the book is the end. That sounds cheeky, but it’s true. At the end, Oei’s life as a painter and, therefore, a kind of historian/storyteller culminates in the ultimate ghost story: the story of the ghost painter, the woman who was hidden from history but whose art lives on. A great idea, but one that could have been refined and shaped into a more compact and powerful story.

I will remember this forever, I thought. I had no idea what forever would be. I did not know what my life would be, but standing there behind my father as he danced with the waves, I knew that I would always watch him tumble, would always think the ground underneath me tumbled just as the waves did. I would never trust that solid ground.

But don’t just take my word for it. Check out what other reviewers on the tour have been saying: