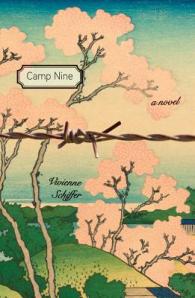 Cecilia Morton—“Chess,” as everyone calls her—is an average, gangly girl growing up in the 1940s Arkansas Delta. When her father died a few years ago, she became heir to his land and the massive holdings of his father as well. But her grandfather is not ready to relinquish control yet, and when he sells off some of Chess’s father’s land to the US government to build a Japanese American detainment camp, he sets in motion events that no one in their small town could have fathomed.

Soon, the detainees arrive—mostly from California—and settle into their new, heavily circumscribed lives. But their presence stirs unease within the rural town, particularly among members of the local Ku Klux Klan.

Chess’s mother, Carolina Morton, is a little different than the other mothers in Rook, Arkansas. A first-generation American, Carrie was born of immigrant Italian parents and raised by a local African American woman. With such a multicultural upbringing and unique not-quite-inside-but-not-quite-outside perspective, Carrie sympathizes with the outsiders and vows to help them.

Carrie befriends the Matsuis, an attractive couple with two dashing sons, and Carrie drags her daughter to the camp until Chess feels a sense of belonging there. No one talks about books the way that Henry Matsui does with her, and no one plays the guitar like young David Matsui. As the Matsuis struggle to adjust in the camp, Henry and David confront what it is to be American, and their exploration of identity leaves an indelible mark on Chess. Decades later, she reflects:

I knew that Camp Nine was something that should never have been. It destroyed lives and separated families; it interrupted joys and brought, in their stead, wretched sorrows. But the experience was mine, too. On a deeper level than I had ever understood, Camp Nine had defined my life.

The contrast of these well-dressed and brilliant urbanites against the sweltering heat and suffocating dust of the Delta is an image I haven’t seen explored in the (admittedly few) books I have read about Japanese American detainees during the war. Schiffer paints vivid images of the Delta, and her portrayal of the vast chasms within its society in the forties is fantastic, such as when she is explaining why the KKK was almost exclusively appealing to lower-class men:

Comprising the lowest form of white society, the new Klan represented the poor man’s answer to all his problems. Its real aim was to ensure the survival, by any means possible, of his endangered niche in our world—one step above the black man.

One of the story’s main conflicts revolves around two questions asked of the detainees—trick questions, really, to prove beyond doubt that the prisoners renounced any ties with Japan and were willing to serve the United States’ government. When Chess asks Mr. Hayashida, an old, quiet farmer at Camp Nine, about why the questions are so important, he replies, “The world would be a better place if the government stopped asking questions of the people, and the people started asking questions of the government.” The question of loyalty is central to understanding the strain placed upon families of suspect origin in the US.

In addition to exploring relationships between and among the detainees, the book does a good job relating Chess’s history—her Italian mother, her whitebread grandfather—to her future. Schiffer expertly teases out various themes of family and history in a world where little is forgotten.

However, the best parts of the book are when characters break from tradition: David becomes a world-class blues musician; Carrie embarks upon an affair with a married man that attracts little retribution; and Chess, instead of leaving the ugliness of Camp Nine far behind her, reclaims the land that her grandfather sold and tends to it lovingly.

Don’t just take my word for it! Buy Camp Nine for yourself from an independent bookstore. Each sale from this link helps support Melody & Words.