“Next to Love” by Ellen Feldman 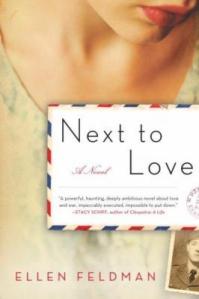 Babe, Millie, and Grace have been friends for as long as they can remember. They have their differences—pugnacious Babe grew up in the poor section of town and never met with approval from Grace’s upper-class mother, while sweet Millie dealt with the loss of her parents at a young age. But now, as World War II summons their husbands and boyfriends, the women must come to terms with the reality of an America at war, where romance and joy are replaced with grief and loss and then with strength and wisdom.

Just as each woman is faced with different obstacles during and after the war, so do they deal with pain in very different ways.

Babe is outspoken about politics and equality, but she has trouble reconciling her private life with Claude, who survived the war but finds the homecoming even more difficult.

Millie is experienced with grief; she knows how to put the past behind her, but her son cannot so easily forget what might have been.

And Grace is lost and lonely, unable to shake the sense that the best and happiest time of her life is behind her. Her life begins to revolve around Amy, her daughter, who yearns for a childhood free from the weight of keeping her mother happy.

The book deftly explores the aftermath of war:

Families banded together against a common enemy, but fell apart slowly and quietly after it was defeated. The incongruity of the horrors the soldiers witnessed and the happy post-war boom years greeting them at home was difficult to reconcile. And in the lives of those families to whom soldiers were not returned, the war left a gaping hole.

World War II also revealed certain hypocrisies in American society. African American soldiers were treated better in Europe than they were back home. Jews were liberated from Nazi concentration camps but barred from certain establishments in the U.S. Women who had filled a variety of jobs while American men served found themselves homebound and marginalized upon the soldiers’ return. The nation that wanted to believe it had triumphed over the bad guys and were therefore the good guys discovered that the truth was not nearly so simple.

Feldman does a superb job showing these societal disparities while also weaving a compelling narrative.

Babe, who had happily worked for Western Union during the war, finds her post-war life as a housewife unfulfilling. As she comments,

“The official line is that women, after the war, couldn’t wait to leave the offices and assembly lines and government agencies. But the real story was that the economy couldn’t have men coming home without women going home, not unless it wanted a lot of unemployed vets.”

They are awash in houses, and cars, and washing machines, and television sets, and air conditioners, and dishwashers, and deep freezes, and pressure cookers, and extension telephones, and Polaroid cameras, and stereos, and long-playing records, and power tools, and every other convenience they never knew they needed. So why is she dissatisfied?

She begins following the case of a murdered black boy, which leads to her involvement in a local branch of the NAACP and then into women’s rights.

Millie has a different kind of experience with marginalization. As the wife of a Jewish man, she has to deal with discriminatory lenders who won’t sell her a house and friends who won’t accept that she could love a Jew. But, true to her optimistic nature, she finds the bright side; “you have to have oppression bred in your bones to find ways around or under or through it,” she comments. The persecution one endures because of race, gender, or socioeconomic status becomes a blessing, in a way, because it grants exceptional strength in the face of obstacles.

Next to Love reminded me in some ways of Siobhan Fallon’s You Know When the Men Are Gone, especially the story “You Survived the War, Now Survive the Homecoming.”

My one qualm with the story is an organizational one. Each chapter spans a period of a few or several years, and within those chapters the timeline dips around, depending on the character’s viewpoint. I was sometimes confused about what was happening when, and had to pause to get my bearings.

But otherwise, I loved this story. Next to Love is moving and beautiful, rich with the pain and the joys of vivid and believable men and women. I could allow myself to relax into the book without analyzing form, structure, voice, or any of the other myriad devices that sometimes obscure a story’s unfolding.

The book delicately handles sweeping topics such as war, love, grief, and equality without feeling preachy or stuffy. Ellen Feldman is a novelist to watch; I can’t wait to read her backlist.

Don’t just take my word for it! Buy Next to Love for yourself from an independent bookstore. Each sale from this link helps support Melody & Words.