“Fly Away Home” by Jennifer Weiner 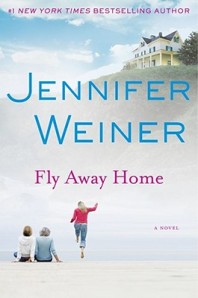 For the thirty-plus years of her married life, Sylvie Woodruff has carefully monitored her words and appearance in the glare of the unforgiving spotlight trained on her, the New York senator’s wife. She works unceasingly to keep the pounds off and to support her husband’s career. Even though some, such as her mother, disapprove of Sylvie’s unflinching devotion to Richard, Sylvie is happy with him and the life they have built with their two daughters.

But when Sylvie finds out that Richard had an affair with a young, busty legislative aide, her entire world crumbles.

Sylvie hides away at her childhood summer in Connecticut, slowly shedding her girdles and power suits and letting her gray hair and curls grow naturally. She begins learning how to cook—something she’d never had time for—and even begins a relationship with an old sweetheart.

As Sylvie re-learns who she is and what she wants, she realizes that her relationships with her two daughters need a lot of mending. Diana is an emergency room doctor who has everything planned out but no idea of what she really wants; Lizzie is a recovering addict who is slowly learning how to live a normal life. Both are struggling with relationship problems of their own, and though Sylvie has no idea of what’s going wrong, she wants to help.

Several good friends of mine have recommended Jennifer Weiner’s debut novel, Good in Bed, commenting that Weiner writes like a real woman who faces anxiety and doubt about her body and her relationships. And after the past summer’s debate about coverage of literature geared toward women that had Twitterers in a tizzy, I had to read Weiner for myself.

It’s easy for me to see why some would call this book a “guilty pleasure” or “beach” read. It’s light and humorous, and it was easy to jump in and out of the story while I was commuting. I enjoyed reading the book, and began recommending it to several women I know before I’d even finished it.

The novel addresses questions of betrayal and forgiveness. Though it’s easy for me say that it would be the end of our relationship if a man cheated on me—especially after three decades of taking care of him!—things are not so black and white in reality.

Does love conquer all? Can betrayal of love truly be forgiven?

Sylvie struggles with the pain and shame she feels, and her hurt is made worse by the public nature of her life with Richard. When asked by a pretty, young reporter why she chose to stand next to Richard at the press conference where he admitted his guilt, Sylvie had no ready answer:

Sylvie opened her mouth. She thought about explaining, or trying to—that if it wasn’t her up there, it would have been her daughters, that she loved her husband, loved him in spite of it all, in a way that a woman as young as the one in front of her would never be able to understand. The life they’d built together, the history they shared—that meant something. But she knew whatever answer she could give wouldn’t satisfy her inquisitor. To Mandy Miller from the Miami Herald, Sylvie was a symbol, a feminist heroine who’d failed her, and no explanation or amount of rationalizing would change that.

Perhaps I’m also too young and idealistic; I found myself wondering the same thing. But Weiner does a good job of attempting to flesh out how a faithful wife would feel after being spurned so publicly. Sylvie cannot immediately throw away the many happy years she spent with her husband, though she admits to deep regrets about the way she has interacted with him and her daughters.

I like Weiner’s emphasis on issues concerning women—physical and emotional insecurity, for one—but at the same time, I found her focus on the female body image overbearing at times. I get it, Sylvie has wide hips!

I also thought it was strange that when Sylvie retreats to Connecticut to heal, she takes up cooking. I can’t deny the particular pleasure of kitchen therapy, but at a time when Sylvie is sorting out her domestic life, it seemed a little strange to me that she became even more domesticated.

But at least the women were well rounded. The male characters, on the other hand, were a constant source of puzzlement.

Where are all the normal guys? I know that Weiner’s audience is primarily women, but she’s not crossing any gender boundaries here. The male characters seem too extreme to identify with—or to be real. Either they’re sniffly, whiny bitches who can’t clean up after themselves, or they’re clean-shaven, square-jawed studs who believe in the sacred importance of family. Richard is the only ambiguous character; he is attractive but entirely dependent on others. Even so, he’s not a very good representative of in-between guys.

It’s no wonder guys don’t read Weiner. If they can get past the female characters’ body image issues, they will only pull up short at the caricatured images of themselves.

In all, Fly Away Home was a fun “guilty pleasure” read that kept me engaged and interested, but ultimately, I would only recommend this book to fans of chick lit—the demographic Weiner seems interested in avoiding.

In writing to real women (who apparently want unrealistic men), does Weiner only put us in smaller boxes?