“Washington’s U Street” by Blair A. Ruble 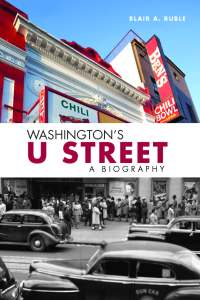 Blair Ruble begins by framing the U Street area as a “contact zone”—a place where cultures and peoples exist side by side. Whether black or white, southern or northern, professional or scholarly, residents in the neighborhood have interacted with each other with very few clashes for decades. U Street has bred activists, politicians, scholars, educators, athletes, musicians, and dancers, among others; and it calls such famous figures as Duke Ellington and Ralph Bunche sons.

Ruble explores the significance of cultural institutions and historical events, such as the founding of the NAACP, Jim Crow and segregation, the civil rights movement, and the establishment of U Street as “black Broadway.” He also discusses often overlooked but equally important topics, such as the elitism of a U Street society based on skin tone, lineage, and occupation.

The U Street area saw important advances in public and private African American education. Nowhere was the conflict between Du Bois’s belief that higher education should be equally available to all races and Booker T. Washington’s focus upon the manual trades more relevant than in this diverse neighborhood.

The author mentions the “white flight” that occurred after desegregation, but he also discusses other factors that shaped the social and ethnic makeup of the area. Ruble follows the creation of Shaw as a distinct neighborhood, and he voices the difficulties that many have had in trying to create a single version of this new district’s history. Ruble carefully delineates the events leading up to the 1968 riots, and he discusses its lasting effects on the neighborhood and the city as a whole.

With the relatively recent arrival of the metro, the neighborhood drew a new breath. But as U Street culture and landmarks are increasingly commercialized, the area is once again experiencing widespread (and often unwelcome) change.

What so excited me about this book was its originality. Paul K. Williams has composed a visual history of Greater U Street as a part of the Images of America series, and Kathy Smith discussed “Greater Shaw” in her edited volume, Washington at Home. But no one has undertaken such a comprehensive examination of this undeniably important neighborhood.

The author is not a trained historian, but his research is impeccable; he brings to light dozens of unpublished theses on the neighborhood. At the same time, I found this account very readable and entertaining.

I was particularly interested in Ruble’s discussion of D.C.’s political representation. He shows that contrary to accusations of mismanagement and corruption, D.C.’s political scene was actually limited due to racist policies outside of local control. D.C. is one of the largest historically African American cities, and its limited political representation is an indication that we still have a lot to learn from centuries of bigotry and intolerant practices.

U Street has been Washington’s vibrant center for many decades, and Ruble’s detailed account of the neighborhood, from before the Civil War to today, puts its modern issues in context.

One recent topic that has divided the neighborhood is double-parking in front of churches. A newer, younger, often whiter set of residents has begun complaining about the crowded parking conditions caused by U Street’s longtime religious community (residents who, in some cases, have moved to the suburbs but still consider U Street home). Without knowing the history and importance of religious institutions in U Street life, it would be easy simply to side with those who want less crowded streets. But Ruble’s detailed explanation of this standoff, along with many other complex issues, shows both sides of the story.

At the same time, however, Washington’s U Street demonstrates the exceptional ability of the area’s many different residents not just to coexist but also to build a strong identity and unique culture.

Full Disclosure: At the time of this book’s publication, I was employed by one of its publishers, the Woodrow Wilson Center Press, in an editorial capacity. However, I would like to think that my position there has not influenced my opinion here, and–as with all of my reviews–I have not received any compensation for this discussion. Rather, I have chosen to review this book for its unprecedented historical analysis of an iconic D.C. neighborhood.