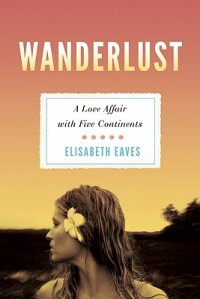 Quick and dirty: Wanderlust is heavy on the lust.
Some compare it to: Eat, Pray, Love by Elizabeth Gilbert
Possible theme song: “You Don’t Know What Love Is” by the White Stripes
Read this book if: You like reading about sexual misadventures all around the world.

To say that Elisabeth Eaves has caught the travel bug is to put it lightly. She is obsessed with seeing new places and meeting new people. She begins her travels by babysitting for a summer in Spain, where she has a short fling with a young waiter named Pepe.

Next, she studies abroad for a year in Egypt, with a side trip to Yemen. Though she recounts almost constant harassment from men in the Middle East, she also acknowledges that her nationality grants her a different treatment than those of her own sex. She comments of her time in Yemen, “As foreign women, we were a sort of third sex, allowed, like Ottoman eunuchs, to pass between two worlds.”

At the end of the year, Elisabeth returns to school in Seattle and a boyfriend, Graham, who works at a ski lodge a few hours away. Elisabeth decides to intern with the State Department in Pakistan the next summer, and she and Graham break up. “I’d made a choice,” she writes, “and it was not to try for love, with all its risk of pain, but to travel.”

Hence begins a cycle that she is unable to break for the rest of her narrative.

After a summer spent in Pakistan, she settles in with Stu, her next boyfriend, in Seattle. The two buy a rundown house and focus on fixing it up. They lead insular lives, with few friends or hobbies other than feathering their nest. After a year, he proposes and she accepts.

But Elisabeth is unhappy in Seattle, though she never tells Stu. She says, “I felt out of place, maybe even more than I had in Egypt or Pakistan. It was harder to know who I was in Seattle. Anywhere exotic, as a permanent stranger, I could define myself against everything around me.”

She revels in, or, at least, never seeks to reconcile, the sharp contrast between her outer life—where she is the perfect fiancée who contorts herself into the kind of woman she thinks her boyfriend would like—and her inner life—where she tires of the claustrophobic responsibility of a two-way relationship.

She yearns to discover herself on another continent, free from mortgages and marriage:

She begins sneaking money into a secret bank account, and announces to Stu that she needs to travel for a few months in Australia before they get married. Two months turn into fourteen, and Elisabeth breaks up with Stu one night over the phone.

One dalliance in Australia is named Jason, a young man who is perpetually high and unemployed. Elisabeth decides to seduce him mostly out of boredom. At one point, when Jason offers to give her a massage, the book veers into Harlequin territory:

I moaned and lolled my head, and rolled it to the side so that my cheek touched his hand. The he put his fingers in my mouth. He might as well have pressed a trigger. Now I’d want him inordinately for that one little act. I’d want him until my desire either dissipated or was denied.

She is often very open about her sexual encounters, even to a fault. But at the same time, I get the impression she’s hiding something. She says that she wanted Jason, but the reader only finds out that she was successful several pages later, as a side note. As a result, I felt myself straining to read between the lines of every interaction she has with men, often concluding that she sleeps with most of the guys she mentions. Being forced to doubt her as both a person and a reliable narrator doesn’t make her a very sympathetic main character.

Elisabeth mistakes lust for love time and again without seeming to realize it. When she meets another Australian, Justin, the two become inseparable. Here Eaves seems shockingly naïve in matters of love and trust:

I hadn’t loved Justin when I first met him; I’d wanted to keep him at arm’s length. But then I grew comfortable, and trusting, and suddenly I desired him, and once I desired him I loved him. I also still loved Stu. Justin loved me. . . . Do people get married, I wondered, because all this volatility goes away, and they finally know, without a doubt, that they only love one person? Or do they get married out of hope that they can rise to the occasion, and then, if other feelings arise, tame them into submission?

She decides to get back together with Stu, who has sailed to New Zealand and set up quite a nice life as a nautical carpenter. He was dating a woman who fades off the scene, of whom Eaves confidently writes, “It wasn’t a competition for his affections; I was the one who compelled him.”

But, of course, she can’t stay with him for long. Again, Elisabeth’s immature view of love and responsibility took me aback. She writes,

I saw my love for Stu as now thoroughly tarnished, not because we’d hurt each other or slept with other people or spent time apart—all those usual suspects made no difference. It was tarnished because now it was wrapped up in obligation. Obligation, of course, is what binds marriages all over the world. You get into financial dependence, kids, intertwined lives, and you can’t get out. Mutual obligation is the norm, the glue. Loss of freedom is the point, the thing that evens out the vagaries of the heart. I didn’t understand any of that.

To argue that responsibility and commitment kill love is to display an inept grasp of it. True love is not destroyed by intertwined lives—on the contrary, it is strengthened by it.

Her lack of regard for the feelings and well-being of others is shocking. I’m not just talking about the many times she cheats on or lies to her sexual partners; at one point, she lies about her sailing experience to a couple looking for a deck hand, and Elisabeth finds herself in the midst of a huge ocean storm. Wouldn’t it have been nice for her employers if they’d had an experienced hand to help out?

Once back in Seattle with Stu, she again weasels out of her responsibilities with him, this time permanently: “Slowly, over the year between New Zealand and New York, I convinced Stu to buy me out of the house, and we said good-bye.” One only hopes he didn’t entertain any desire to return to his successful career in New Zealand.

In New York, Elisabeth begins a relationship with Paul. When she breaks up with him after two and a half years and he cries, she claims to be just as anguished—not for being the cause of his bewilderment and pain, but for closing the door on “a possible life I’d entertained.”

She finds a new man, called only “the Englishman.” The only thing we learn about the two months’ vacation she had with him in Mexico is what they ate and how often they had sex. (Answer: Avocados and very often.) He is more like her than any other man she has met, so, of course, he ends up leaving her.

When she settles down with the next man, Dominic, at the age of 30, she only does so because her debts have mounted and she needs someone to take care of her.

While with Dominic, she begins a phone-relationship with Justin, back in Australia. “There’s no downside,” she reasons. “It’s like hearing from an old friend, with the added frisson of desiring and being desired, but with no consequences.” (I bet Anthony Weiner would disagree.)

Early in their relationship, Dominic asks Elisabeth how many people she has slept with—a reasonable question, to me, a product of the condom generation. But she sees it as “a sign of an anxious, visceral sort of sexism that I wanted nothing to do with.” So she lies, and resents him thereafter for asking.

She uses feminism as an excuse for selfishness and infidelity, claiming that “unlike women of an earlier era, I wasn’t raised to subordinate my desires to the needs of others.”

This kind of misguided feminism comes up again when she concludes that she “forgot to make a life . . . to get a steady job, or belongings, or a family of my own . . . to choose somewhere to be.”

She continues, “I forgot to the things that, despite decades of feminism, I felt the niggling weight of, in a way that I imagine men don’t.” If one is to believe Eaves, men never experience the need or desire to get a job, assemble belongings, make a family, buy a house. (Even Neil Strauss needs to live somewhere.)

Perhaps what irritates me most is her smug ignorance and rejection of what she calls “quotidian life.” She doesn’t understand why anyone would want to settle down – they’re only settling, she reasons. “I knew in theory that a grown-up chooses to leave her highs behind, in favor of a stable life,” Eaves writes, without acknowledging that, perhaps, there can be highs other than forbidden trysts in dirty hostels with strange men.

Eaves is terrified of seeming vulnerable, of not appearing tough enough. She wants to conquer men before they can conquer her. While men may aim for sexual conquests, however, Eaves needs romance. She needs men to fall in love with her—to need her.

There is nothing wrong with craving exotic adventure, but she hurts those whom she claims to love. She is desperately afraid of becoming average, of trusting another person with her feelings, of discovering who she really is. So she flees again and again.

But she brings with her narrative no self-awareness, no sense of maturity or wisdom. As a reader, I want to see change, revelation, epiphanies—anything but an endless string of affairs. There is no arc, no continuous theme or idea to tie these disparate anecdotes together, except her insecurity and desire to hide in sex.

But don’t just take my word for it! Check out these reviews: